Norway: A Nature Experience at Night in the Norwegian Woodland

Can art turn the dark Norwegian forest into an engulfing visual experience? Norwegians love and protect their forest and actively enjoy it, but their time in the outdoors is limited by the hours of daylight. An international trio of artists accepted the challenge posed by the question above and created a setting where the forest became enchanted in the darkness and the viewer was invited to enter the fairy tale, for one night in the Norwegian autumn. 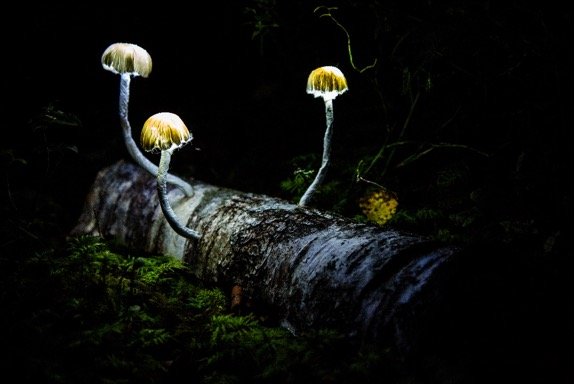 The happening took place in Dølerud, an old smallholding deep in Norwegian woodland dating back to the 17th century when supernatural ancient creatures of Scandinavia were a real part of people’s folk beliefs. The forest law, under paragraph 11 “fairytale forest”, now protects the area. The artists familiarized themselves with the Dølerud area and the forest became their playground. With LED diodes as a medium along with 2000 meters of cable, their objective was to transform the Norwegian hiking experience into something out of the ordinary.

To approach the trail after nightfall, they aimed to highlight the natural beauty and mysteries of the woodland. To realize this, they custom-made light elements for different areas of the trail, with the aim to give a multi-sensory experience for the viewer. In addition, the project became a journey for the artists themselves with unexpected angles and detours.

The creepy crawlers of the forest were drawn to the lights and became part of the outcome on the forest stage. No vehicles to transport the equipment were allowed to enter the protected forest location; everything was carried by hand on a muddy footpath. The location was even without electricity. The terrain itself thus influenced the project, creating technical challenges and constant updates to the outcome.

An international team was assembled for the project, inspired by darkness, nature, folklore, architecture, and the use of light. It was led by three artists with diverse backgrounds; Melissa Larsen (NO) artist and lighting designer with a longstanding fascination for electronics, wires and lighting innovation; Joao Pereira (PL), artist and technician well known for organizing underground events and creating deco and light installations since 1995. His predominant medium being audio; acoustic and electronic instruments; and Andy Cross (UK) who works with video mapping and visual performance, and is known for creating events and experiences since the ‘90s and performing as Selectah X. in England, USA, Australia and Scandinavia.