Thailand’s second largest city couldn’t be more different from its first, mystical temples, bustling street markets and an abundance of lush greenery inhabit this fort-walled city, along with some of Thailand’s friendliest residents, and a few elephants. While away the morning paying homage to Buddha in the cities sacred temples, spend the night drinking Samsong in the hills with the locals and eat a lot of street curry.

Temples
With over 300 temples, gilded gold-tiered roofs characterize Thailand’s northern capital. Wat Chedi Luang and Wat Phra Singh are the cities most important, the former previously housed the infamous emerald Buddah that can now be seen in Bangkok, a replica sits in its place atop an ominous looking set of stone steps, a commission put in place by the King of Thailand. The views from the top make the breath taking journey up there more than worth it. The winding streets of Chiang Mai demand two-wheeled transportation, so pootling between temples on a push-bike has to be the best way to do it. 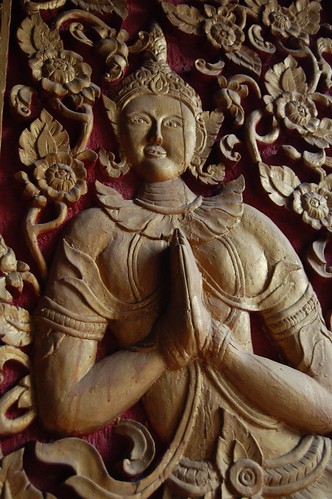 Food. It’s everywhere in Thailand, the sights and smells of cities are often defined by their particular variety of stir fry or curry and Chiang Mai is no different. Bordering with Laos means that traditional curries here are typically mellower than their southern compatriot and often broth-like in form. There are lots of places to learn the art of a tasty Kai Soi (traditional coconut noodle curry) from the more upmarket boutique hotels that have risen in the formative years, to the ramshackle local food huts, everyone here is an expert in the delights of Thai cuisine. Indulge at Chiang Mai’s night market on the central plaza after sunset and you’ll more than likely be treated to a show or dance of some kind too.

Trekking
Notorious for hippies and hillside trekking, the latter is one of the main reasons tourists flock to Chiang Mai, with various routes and lengths of trek available, it’s a must-do option for all. Booking a three day trek is the best way to experience the cool hillsides at their best, even the first couple of hours of bumpy dust roads will be forgotten once you reach the first waterfall, and if your bruises are still giving you jip, an evening spent sampling Samsung whisky around the campfire with your local guide will soon lull you into a deep and comfortable slumber. Most treks also include a spot of white water rafting and elephant trekking, but timing is crucial for the former, as unless you visit out of season the river will likely be too shallow to raft, not that this stops enthusiastic Thai’s from trying.

Chiang Mai is enjoying a modern boom of late, with more and more chic boutique hotels and shops cropping up every day, the city is becoming a Mecca for the fashion conscious as well as discerning traveller, these three secrets won’t be kept this way for long.

Louisa Logan is an avid traveller of South East Asia. She first visited the region with her parents on an Audley tour and has since made several journeys back to experince the rich culture of Thailand.