Shanghai Worth the Trip

Do you remember the original Star Wars? It was actually episode 4, in which young Luke Skywalker floated very quickly, quietly and smoothly across that arid landscape, in his long-ago and far-away equivalent of a small car. As far as this planet is concerned that may be a few years away in the opposite chronological direction, but there is somewhere that you can float very quickly, quietly and smoothly across the surface of this planet right now. If you fly into Pudong International Airport, the quickest way of getting into central Shanghai （上海）is to take the magnetic levitation train to Pudong, where you can either connect to the Shanghai Metro system, or take a taxi. But the maglev train is not just a way of getting into town from the airport. It is a way of getting a glimpse into the future. It glides along at a speed of 431 kilometres per hour. It partly follows the route of a wide main road, on which the city traffic probably moves at about 43.1 kilometres (43.1公里) per hour at best. It floats past a spaghetti junction or two, where the traffic goes round in circles. It covers a total distance of 30 km in a total time of seven minutes and twenty seconds, depending on the time of day. That is seven minutes of what may feel like science fiction but is definitely science fact. Shanghai itself is a fascinating city with a fascinating history and some amazing sights to see. Whether you spend a couple of days or a couple of weeks in the city, there are things in and around Shanghai that are not to be missed.

Get Out of the City 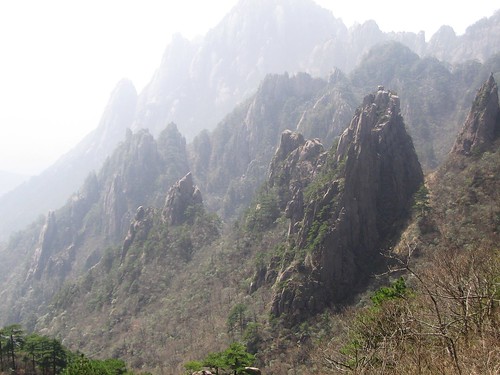 However, if you ever do make it to Shanghai, do not make the mistake of limiting yourself to a city tour. Not far south west of Shanghai, about twice as far as Hangzhou, is the mountain range of Huangshan (黄山). This is an area of such outstanding beauty that UNESCO has listed it as a World Heritage Site. The rocks were lifted up during the Mesozoic Era, about a hundred million years ago, from what had previously been a seabed. During the Quaternary period, the mountains were carved into by glaciers, but the three highest peaks are still more than 1,800 metres high. They are not just bare rock as they are largely covered with vegetation. On the other hand, some of the peculiarly shaped granite peaks rising out of that vegetation are fantastic. The area is famous for its breathtaking scenery. Looking at photographs is not quite the same, of course, but just look at the sheer number of them that people have uploaded to Google. Apart from the mountains themselves there are lovely bridges, temples, gateways and even hotels that the locals have contributed over the centuries. That Oriental building style is wonderful. The Chinese, at least those in Anhui, are very good at building pathways and stairs into the sides of mountains without spoiling the aesthetic appearance. Huangshan has been described by many as the loveliest mountain in China and has been acclaimed through their art and literature for centuries. Many artists from near and far still go there on a kind of pilgrimage.

If you enjoy hiking, here is the place for you. It is not the easiest of places to go for a walk because it is all either up or down, but it may be the prettiest. There is a cable car for those who are not up to climbing. And there are hotels perched among the rocks about as high as most people are able to climb. Perhaps the most magical aspect of all the scenery for which the area is famous is the way the peaks rise above and out of the clouds. Sometimes it is as if they were islands in a sea of cloud. The scenery from below is wonderful, but it changes as you go up into and then out of the cloud. Maybe passing through the Pearly Gates is something like this. One final piece of advice, though, if you prefer to avoid crowds, is to avoid this bit of Heaven on Earth during public holidays. The locals enjoy hiking up into heaven just as much as the tourists.

This article was written by Johanna Zhen (甄小美). The China Travel Company was very helpful when she wanted to plan China tours, offering both expertise and advice, so Johanna wants to thank them as well as recommend their services.