Shanghai - The Best Place to Begin Your China Tour

With a population that exceeds 23 million, Shanghai is the largest city in the People's Republic of China and also in the world. The city is located in the Delta region of Yangtze River in eastern China. The Huangpu River splits Shanghai into two. The western side of the river is known by the name Puxi and is the older part of the city. The eastern side, Pudong, is the newer part of the city. Shanghai is a global city and a major financial center with its container port being the busiest in the world. Shanghai's importance grew in the 19th century as Europe recognized its economic potential and favorable port location. Shanghai is also a popular tourist destination because of such historical landmarks as The Bund, City God Temple, Yuyuan Garden and the growing skyline of Lujiazui.

History of Shanghai in a Nutshell

The history of Shanghai can be traced back to the Song Dynasty that existed over a thousand years ago. However, the city attained prominence following China's defeat in 1842 in the First Opium War. Shanghai was one among the five cities that were opened as treaty ports for trade. The city has witnessed amazing growth over the years. Germany, Italy, Austria-Hungary, the United States, France, Russia, Japan and the Great Britain were given concessions Shanghai. In the areas controlled by these nations, the law of the Chinese was not applicable. All these areas are in downtown Shanghai.

Shanghai's golden age was during the 1920s and 1930s. It was the most prosperous East Asian city. Japan occupied Shanghai in 1937. However, concessions were not imposed again after the war. In 1949, the Communists won the civil war and the business people moved to Taiwan as well as Hong Kong. This led to a decline in Shanghai's importance till the government took initiatives to bring in foreign investments in the early 1990s. The government's biggest move was opening up the rural Pudong area. The area has transformed into a business center that the countries around the world envy of. World Financial Center in Pudong is the third tallest building in the world.

Places of Tourist Importance in Shanghai

The Bund of Shanghai

The Bund is a typical architectural symbol of Shanghai, extending from Jingling Road in the south to the Waibaidu Bridge in the north. It is constructed on the western bank of Yangtze River's tributary Huangpu River which is 114 kilometer long. The embankment which was there when the first British company opened its office in 1846 has now become an epitome of elegance. A retaining wall that is 771 meters long has been built for controlling flood. There is a sightseeing walkway on the top of the wall that is paved with tiles of different colors. The walkway is lined with flower beds and garden lights of European style.

Originally known by the name Jinshan Temple, City God Temple is located in the bustling Huangpu area of the Yuyuan Market and has a history of more than 600 years. Built during the times of Emperor Yongle in the Ming Dynasty, it is a great scenic spot in Shanghai.

It is believed that the Yuyuan Garden was built more than 400 years ago by the rulers of the Ming Dynasty. It is a place of tourist importance in Shanghai because of its exquisite layout, stunning scenery and artistic style. 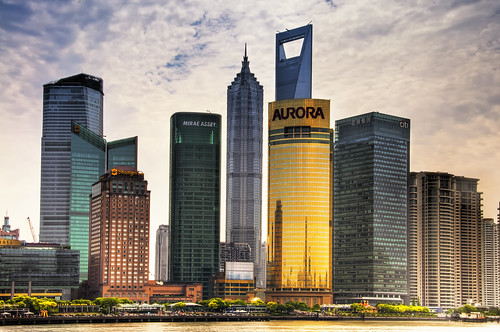 Among the cities of China, Shanghai has the least amount of pollution and its cityscape reveals its history. On The Bund, one can see British-style buildings, and in the erstwhile French Concession, French-type buildings are still visible. The old racetrack of the erstwhile British area has been converted into the People's Park and one of the major subway interchanges has been constructed underneath the Park. The subway stops at former American and at Xiao Nan Men as well as Lao Xi Men Small, South Gate and Old West Gate respectively, named after old Chinese walled city's gates. The wall is no longer there, but the area has some traditional Chinese-style buildings. The Yuyuan Gardens are located in this area.

Shanghai seamlessly blends eastern and western cultures and is referred to as the Paris of the east. Shanghai offers something to everyone because of its 2000 years of history. Shanghai is steeped in ancient culture, but offers the modern amenities such as serviced apartments and hotels that are well connected to airports. The perfect starting point to begin a tour of amazing China is Shanghai.

Nowadays it is easy to find the accommodation in Shanghai online. There are plenty of comfortable hotels and Shanghai apartments for different budgets.

Written by John Chen who is a traveler and writer, and who is currently living and working in Thailand.